Between my wife wrecking her car back in August, and the guy who rearended F and I in the Cadillac because he...I don't know...was picking lint off his headliner or something...we have to buy at least one car, and as many as two. (We have options because I still have the Karmann Ghia, but it's more of a warm spring/summer/early-fall, as weather permits type car, you know?)

Today we went car shopping. We started at the Jeep dealership to look at the Jeep Compass. It seems to be a pretty solid car/truck. My biggest gripe is that AC is not standard on the thing. Jeep is probably the only car company that lists AC as "optional".

After we left the Jeep behind, we visited CarMax to do a little one-stop shopping. We figured we would be able to look at and maybe drive lots of different cars, rather that hop around from dealership to dealership. The prices of the cars there were really not important. We can track down the car we want at the price we want it through other sources.

I was 100% impressed by the experience at CarMax. Before you go out onto the parking lot, you and a salesman are able to click through the inventory on a computer terminal. You get good search capabilities, and it let's you pick out exactly which cars you want to look at. It's a very clear, and easy process.

On the lot, the simplicity continues. All of the keys are hanging off the windows in locking boxes, and all of the salespeople have keys to the boxes. Simple as pie. If you want to look at a car, he opens the box, and pulls out the key. No-muss, no fuss. No "Okay. Let me note down the inventory number, and go get the key. Be right back." Rather, it's "This one? Okay." The salesman was at least marginally trained. Each time he pulled a key from a lockbox, he made sure to unlock all the doors, pop the trunk, and then give us the key to start it up.

See a car you like? Want to drive it? Done deal. Assuming your salesperson had the presence of mind to grab a dealers' tag before you left the building, you get in the car, and drive out. The salesperson drives through the gate. The gate has a system similar to what you might have going into your parking deck at your complex, or at work, only it has two steps: Each salesperson has his own "scan card", that gets scanned, and each car also has a tag. The system logs which salesperson took out which car. The process reverses upon return. Easy-peasy.

Between the process, and the no-haggle policy, I support CarMax. Did we buy a car today? Will we buy our car from CarMax? Probably not. I think you can still get a better deal from a dealership, and one thing a dealership can offer that CarMax can't is used-car certification. CarMax does offer a 3-year warranty, though.

I'm looking for a slightly newer Cadillac STS to replace my beloved "Bruce", and we drove one today. My question is...what's up with the gated shifter? What's up with gated shifters in general? You know what I'm talking about: 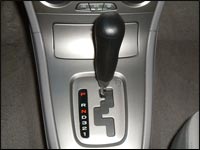 Yeah. Those. The things that make it take just that split-second longer to put the car in gear. What's wrong with the straight-line shifter? It's simple. It works. This gated mess doesn't add ANYTHING. Not safety. Not imagined sportiness. Nothing. It adds frustration, and it makes it take longer to feel at home in a car. You can't just jump in and drive it. You have to look at how the stupid thing is configured. It'd be one thing if these had standard layouts, but NO. This ugly thing is ALMOST a deal-breaker for the 1998-2004 Cadillac STS. There. I said it. Almost. Don't hold me to it though. As a matter of fact, nevermind. Forget I mentioned it.

Mau said...
Okay, fine. They're Carmax-certified. What good is it though. I can sell you a Mau-certified car, but what good would that be? The Carmax guarantee is 30 days for most states. That's all the Carmax certification process buys you - 30 days.

I found out Saturday that Saab certification buys you 6 years, and 100000 miles.

Which would YOU prefer?