Know What
I'm Sayin'??
Wednesday, October 11, 2006
It don't matter that you got, not a lot. So what? They'll have theirs, you'll have yours, and I'll have mine. And together we'll be fine...
I saw this article yesterday.

15th Largest Diamond in the world was found in the mountain kingdom of Lesotho, which is surrounded on all sides by South Africa. Called the Lesotho Promise, the raw diamond is 603 carats, and is Class D, which means it is of the clearest quality, with no blemishes! 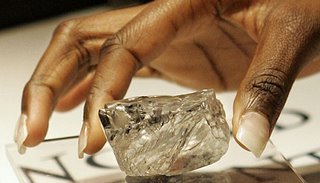 The...Lesothans?(actually it's Basotho)...are selling the diamond to a British company for $12.4 million dollars. The British company will cut the raw diamond into a single large stone and many smaller stones. The cut diamonds will have a value in excess of $20 million.

This is where it gets interesting: The article says that Lesotho's 1.8 million residents are among the world's poorest. My research tells me that extreme inequality in the distribution of income is a major issue. It's so bad that Lesotho has signed an "Interim Poverty Reduction and Growth Facility" with the International Monetary Fund, an organization working to secure financial stability, promote sustainable economic growth, and reduce poverty, among other things. Lesotho also has one of the highest rates of HIV infection in the world. 2003 numbers show that almost 1 in 3 adults is living with HIV/AIDS, and average life expectancy is 35 years old.

Hopefully they'll manage to spread that $12 mil around a little bit.